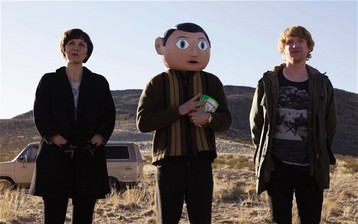 It is usually noted that eyes are the most expressive feature of the human body. In acting, this is exceptionally true because the eyes of an actor provide so much information to the audience. Emotion, intention, and even composition benefit from the organs of vision.

So what happens when you mask an actor? Historically, masks were a common aspect of the stylized costuming featured in ancient theatre productions. But as the years progressed, naturalistic acting became evermore significant. Now masked characters seem to be reserved for slasher villains or superheroes. And I think it is safe to say that Frank is neither of those.

The film involves a wannabe musician named Jon (Domhnall Gleeson) who stumbles across a zany band immediately in need of a keyboardist.  Accepting the position without many details, Jon soon finds himself in Ireland where the band intends to record an album. But even living under the same roof does not uncloud the mysteries surrounding the band, especially when it comes to its front man Frank who just so happens to wear papier-mâché head.

I will refrain from explaining much more of the plot because I feel like this is the kind of film that benefits from knowing less going into it the first time. After all, a good film has its surprises. And director Lenny Abrahamson has effectively created a surprising film that fuses the comedy and drama genres together. Not often will you find a film filled with frequent humor and a haunting depiction of mental illness.

Yes, within the hallow head of this film lies a unique portrait of mental illness. It is perhaps one of the better films to tackle such subject matter since 2012’s Silver Linings Playbook.

Though Jon has the most screen time, Frank is definitely the character that steals the show. With his head completely encapsulated, the performance of Frank relies heavily on body gestures and the pacing of the film through meditative cinematography and sharp editing. But there is something to be said about the static facial expression of the big, faux head. Even the unchanged face can express multiple emotions.

👑 Welcome to the kingdom. The next Planet of the Apes film has its title.
🌈 During an appearance at #CineEurope, Illumination CEO Chris Meledandri spoke with Deadline’s Mike Fleming, Jr. about the animation studio’s intent on portraying relevant topics like the same-sex kiss seen in #Lightyear.⁣
Legendary musician and composer Vangelis has died at the age of 79 🕊⁣
🦑 #SquidGame creator Hwang Dong-hyuk has confirmed the return of two characters.⁣
🤝 Cianfrance and Gosling join forces again!⁣
Are you ready to return to Panem?
%d bloggers like this: