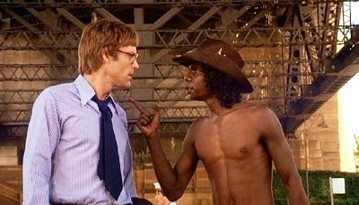 I’ve recently been attracted to the Australian New Wave film movement. Taking place between the 1970s and 1980s, the movement was a time in which Australian filmmaking was revived to global success. Some of the more mainstream films to come out of this era were Mad Max (1979) and Crocodile Dundee (1986). However, there are many other films of notoriety that should not be forgotten; Peter Weir’s The Last Wave included.

Going into this film, I really had no idea of what to expect. Unlike most of the films I watch, I did not do any preliminary research regarding the plot. All I knew is that it was directed by Weir and had something to do with waves. To be honest, I thought it was going to be a film about surfing.

I was undoubtedly wrong.

Set primarily in Sydney, the film follows lawyer David Burton (Richard Chamberlain) as he takes on a case outside of his own comfort zone to defend a group of Aborigines accused of murdering one of their own. With poor cooperation from the Aborigine men, David’s attempt at uncovering the truth becomes ever so aggressive when the case begins to possess his private life.

The film is, in every sense of the word, a maverick. So engrossing is the mysticism that surrounds the Aborigine culture as it clashes with modern society. Through this clash comes an experience that stretches across multiple genres, including courtroom drama, mystery/thriller, and apocalyptic/natural disaster. If by some chance you think this is an exaggeration on my part, remember that film is a very capable medium for storytelling.

While watching The Last Wave, my mind toggled between the many different genre mindsets. The bizarre opening propelled my expectations into a disaster film attitude, which quickly changed multiple times over the course of the free-spirited film. Weir consciously guides the film in all directions, allowing viewers to experience the blend of tension and wonderment that comes when being lost in translation.

To the benefit of the transcendent story, the cinematography and musical score really absorbed my attention. Predating the sound and vision masterpiece that is Blade Runner (1982), The Last Wave’s synthetic soundtrack and evocative shot compositions brought me to an outlook that aroused a soothing past, a conflicted present, and a hopeful future. Just like the concept of Dreamtime, a central theme of the film, I was lost in a place beyond time and space while viewing this film.

In addition to the film’s technical marvels, Chamberlain brought on a strong lead performance. Just as captivating was David Gulpilil in the role of one of the accused men named Chris Lee. Together, Chamberlain and Gulpilil seamlessly set up the societal contrasts their characters face. But singularly, Gulpilil brings the sympathetic and objective representation of Aboriginal tradition to what could have been another fantasy-like film detached from its source mythology.

The fact that The Last Wave feels grounded in reality even while events of Aboriginal mythology are happening makes the film all the more effective. Just as Close Encounters of the Third Kind (1977) did that same year, The Last Wave explores supernatural possession in the least cheesy of ways simply because it takes itself seriously. Thus, if I had to categorize the film in the most basic sense, I would say that it fits within the category of “something is coming and everyone should watch out”. I’m not sure if there is a definite term for this classification, but it’s definitely a subgroup of the apocalyptic genre godfathered by the story of Noah and his ark.

Mankind has always been fascinated by apocalyptic situations. The threat of natural forces conquering modern civilization is still a fear among many. But do we really have a say in the matter? Sure our technology continues to reach new heights, but do we really stand a chance against forces that predate our very existence?

🦑 #SquidGame creator Hwang Dong-hyuk has confirmed the return of two characters.⁣
🤝 Cianfrance and Gosling join forces again!⁣
Are you ready to return to Panem?
💰 The box office is coming back one film at a time.
🐍 We have not seen the last of @evil.
Ned Beatty, an acting legend like no other. His filmography will live on, though he will truly be missed.
Create your website with WordPress.com
Get started
%d bloggers like this: