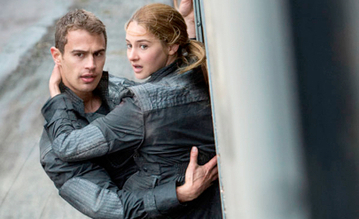 When you get an overload of niche films, it’s difficult not to be especially harsh when critiquing them individually. After all, audiences aren’t going to want to spend their time and money on the same old story minimally retooled. Currently, this is the case with superhero films and young adult adaptations. While not every film belonging to this trend is a dud, it’s safe to say that masterpieces aren’t typically produced this way. Because for every The Dark Knight or The Hunger Games, there is a swarm of other theatrical efforts that are the quintessence of DVD bargain bins.

With Twilight kicking off the current movement of adapting juvenile fiction into movies, critical acclaim of such work has been a lot less positive than the box office numbers. Not until The Hunger Games did a young adult adaptation see both positive reviews and high profits. Thus, a trend that seemed to be on the decline was given life through a new trendsetter. Enter Divergent, a trend follower hoisted up on a pedestal by the trendsetter’s distribution company. Containing a production budget of $7 million more than The Hunger Games, Divergent proves that an increased budget in no way means higher quality.

Set in a futuristic dystopian Chicago where society is divided into factions, Divergent follows the factionless Beatrice “Tris” Prior (Shailene Woodley) as she self-reliantly joins the faction of her choice. However, because of her factionless status, Tris is considered a threat to the government and must tread lightly by displaying her undivided commitment to her new lifestyle. During this time, she undergoes many stages of training and falls in love with her instructor nicknamed Four (Theo James). Soon enough political corruption comes to light and Tris is forced into the unknown in attempt to make things right.

The film is riddled with poor computer graphics and over-the-top music sequences that put a dent into the film’s tone. It’s as if someone cut and pasted excerpts of George Orwell and Nicholas Sparks novels into one film treatment and then gave it a blend of adolescent themes for good measure. With such inconsistency, my mind was constantly toggling between what aspects of the film I could latch onto.

Story wise, Divergent is not all that fascinating. Unlike its themes of nonconformity, the film is constantly complying with genre clichés. Did the filmmakers just have a bulletin board of overused dystopian elements that they made sure to include in their film? Whatever the case may be, things are pretty predictable from the film’s start. Sure it has an ending with more substance to it than The Maze Runner’s, but the overall plot is prolonged and tiresome.

Fortunately, the film finds most of its success through its actors. Woodley continues to prove that she is a performer of strong caliber, as she holds the film together from beginning to end. At her side is James, an actor that came out of nowhere for me and ended up being the most intriguing aspect of this otherwise silly film. Through Woodley’s outsider likeability and James’s robust peculiarity, the attributes that these two actors display compliment each other.

Although not the best of the recent YA cinema trend, Divergent isn’t the worst of the bunch either. If I were to judge its quality on a scale from zero to 100, I would place it somewhere around 50. Its got its moments that pull it away from an unwatchable zero, but it’s still an ‘F’ based on any high school teacher’s grading scale. If you haven’t seen it by now but are still interested, your best bet is to pay nothing by checking it out from your local library.

🦑 #SquidGame creator Hwang Dong-hyuk has confirmed the return of two characters.⁣
🤝 Cianfrance and Gosling join forces again!⁣
Are you ready to return to Panem?
💰 The box office is coming back one film at a time.
🐍 We have not seen the last of @evil.
Ned Beatty, an acting legend like no other. His filmography will live on, though he will truly be missed.
Create your website with WordPress.com
Get started
%d bloggers like this: