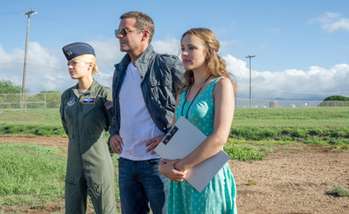 In my review for Tomorrowland, I briefly mentioned my issue with modern movie trailers and how they give away too much of the movie.  So when the trailer dropped for Aloha, I was excited to see not very much plot detail.  It just looked like a well-written dramedy from Cameron Crowe, and I trust Cameron Crowe to make well-written dramedies; he’s almost famous (ha) for them.  With my love of the director and cast, I thought they could say anything (haha) and I’d be fine with it.  I figured the film wouldn’t buy the farm, but instead it bought a zoo (hahahahahahahaha, sorry).

All puns aside, the film really is a bit of a zoo.  I’m not sure if I’m going to be giving spoilers in this review or just be giving a more accurate plot synopsis than the trailers did.  The trailer pitched Aloha as a fun little rom-com about Bradley Cooper in Hawaii dealing with the fallout of his relationship with Rachel McAdams and starting a new relationship with Emma Stone.  Pretty straight forward.  But the movie is actually about Bill Murray trying to launch a Death Star.  Yeah.  It’s weird.

At the beginning of the movie I was confused.  The script is so loaded with jargon; I’m pretty sure only high ranking military officials will be able to understand why Bradley Cooper had to go to Hawaii.  Sadly, the highest rank I’ve ever held in the military is being called a “noob” while playing Call of Duty. So I was lost.  But plenty of rom-com’s have jargon to establish a shell of a plot around the inevitable love triangle, so that’s forgivable as long as it sets up a romance.  Unfortunately, the romance never really pops, and the jargon sticks through the whole movie (a solid chunk of the movie is devoted to a heavy-handed message about the dangers of privatized space exploration. I’m not joking).

But this is from Academy Award-winning screenwriter Cameron Crowe! At least the dialogue will be good… right?  Nope.  Every line seems randomly generated from deep-sounding-things dot com.  None of the words sound like anything a human would say to another human.  I can’t really complain that the characters themselves wouldn’t say these things, but the characterization in the movie is all over the map.  It feels like everyone started off as one-dimensional and was then given more things to do in hopes that it would make them feel better rounded.  That fails, and all motivations are scattered and nonsensical.

I really wanted to like this movie.  The whole time I was watching it, in my head I just kept thinking, “this is going to get better”.  An hour and a half later, the credits rolled, and it didn’t.  Aloha wastes the talents of the cast in a jumbled mess of a movie.  That being said, Emma Stone wears a pretty funny hat, so at least it’s not a total loss.

Quick Review: The biggest problem with Aloha is its scattered script. The little that was done well is washed away by a tidal wave of half-baked plot points.

👑 Welcome to the kingdom. The next Planet of the Apes film has its title.
🌈 During an appearance at #CineEurope, Illumination CEO Chris Meledandri spoke with Deadline’s Mike Fleming, Jr. about the animation studio’s intent on portraying relevant topics like the same-sex kiss seen in #Lightyear.⁣
Legendary musician and composer Vangelis has died at the age of 79 🕊⁣
🦑 #SquidGame creator Hwang Dong-hyuk has confirmed the return of two characters.⁣
🤝 Cianfrance and Gosling join forces again!⁣
Are you ready to return to Panem?
%d bloggers like this: